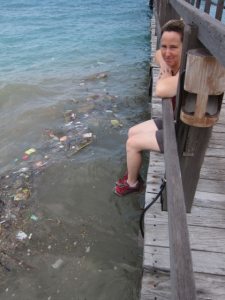 Turned out spending 3 nights at the Waka Shorea Resort in the Bali Barat National Park with limited WiFi was a unique stop for me and Becky on our adventure around Northwest Bali. An opportunity for a little creative retreat, we could finish reading a few books, write some blog posts…

Becky is a travel writer and sent a media query to see if it someone would be interested in having us come stay to write a review. They offered us 3 free nights! That could have been our first warning had we been paying attention to the signs. She does this regularly and I’ve been her travel buddy a few times… usually the first night is free,  maybe two nights and then they offer us additional nights at 50%. Three nights free seemed great, and the location sounded cool, near Menjangan Island with great diving.  Usually, when we arrive  the General Manager comes to find the travel writer doing a review of the resort, that’s just standard. We learned quickly that things at the Waka Shorea were run a little differently…by night #2 we had not seen or heard from anyone.  When we first checked in a soft spoken and really young man helped us and said he would send the Dive Master to meet with us the next day. It never happened,  we never heard from anyone for the next 3 days. No one came to talk to us about diving. Saved us $115.

The Waka Shorea calls itself,  “An Environmental Sanctuary” on the most Western Peninsula of the Bali Barat National Park. It’s accessible by a 20 minute boat ride from Gilimanuk. This was a little bit of a mystery to us also, we read something on trip advisor about a short boat ride to the Peninsula where the resort is, but no one mentioned it in the email confirmation or let us know on the phone. So we went with the flow when we arrived at Gilimanuk,  jumped on (literally) an old rickety fishing boat that was luckily carrying a few cases of Bintang and cracked open a beer and held on tight. For most people a rough sea ride on a dilapidated boat and a beer may not go well together, for us, it did the trick.  Once we arrived, we walked off the pier to the beach and the friendly hotel staff that greeted us said, “Welcome to the hotel, we know the trash on the beach is not very nice.” He then started to tell us about the snorkeling, diving, cycling & hiking that’s all right here for the resort guests. 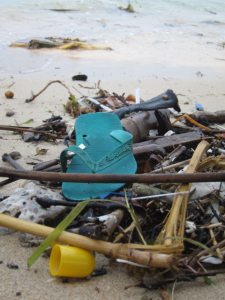 The trash on the beach and the state of the grounds of the hotel makes you want to take pictures and start a campaign against them instead of for them. There are dead tree branches lying all around the pathways. Although the trash that washes up on the beach doesn’t  from the resort, it’s floating in from elsewhere; they really need to do something to clean it up every day. Picture this… Becky and I sitting at “our table” on the beach front restaurant looking a crystal blue sea  & washing up on the shore just a few feet in front of us, was a random flip flop, a variety of plastic bags, potato chip and candy wrappers. This is what we saw from our table as we ate breakfast, lunch and dinner.

The food became an ongoing joke between us. We read on trip advisor that it was “warung style” food. It’s just that there was no Indonesian food on the menu except Gado Gado. Not even Nasi Goreng. It was all pizza, pasta, chicken & tuna. The prices were the real joke; $8 minimum for anything on the menu. It’s double what you’d pay in Ubud for warung food. I’d pay that at a Western style restaurant that had all organic, carefully prepared food with love and high vibes. (which is how they describe food in Ubud) One night we decided to skip dinner and just hit the mini bar in the room. We had to ask them to use butter to cook our eggs in the morning because we could really taste the re-used oil in the pan. It sounds spoiled…it was actually that obvious, you could taste the nasty oil. Once they used butter it was better. It was a 20 minute boat ride to the mainland, so our meal options were limited. The food was an ongoing source of entertainment. I ordered the chicken wings for lunch…they were out of chicken wings. We ordered the Tuna Garlic Butter and I swear they cut off the ends of the Tuna and served us that. We’re not sure what happened to the middle of the filet but we had our suspicions when we saw some of the staff leaving to get on the boat that they may be taking the rest of our fish in their backpacks. Anything’s possible.

On a positive note, the resort had enormous potential if they addressed the maitenance of the grounds and the food. There were barking deer that wander by the rooms, wild pigs roaming by the pool with the other guests and black monkeys hanging in the trees on the pathways. The rooms are quite nice, comfortable beds and kept very clean and cozy.

By giving some constructive feedback (complaining) to “a manager” we finally met with “Mr. Ari”, the Sales Manager, who had just arrived.  I have to say, it’s been a long time since I’ve seen someone in a professional role of “Sales Manager” of  a resort play dumb about the various feedback we gave him. We talked about the food, the upkeep of the grounds, the trash…etc. Only after about 30 minutes did he finally relax a little when I said, “we aren’t really telling you anything you don’t already know are we? How often do you get complaints like this?” Mr. Ary relaxed bit, chuckled and admitted he has heard these complaints but wouldn’t let us know how often. He let us know that there is actually no chef in the kitchen. Different members of the staff cook, they aren’t trained and sometimes (probably most of the time) they are interns from the local tourism school. That explains everything right there. He became quite sympathetic about the food.  Ary originally told us the resort had been open for 5 years, we found out just before we left it’s been open 10 years. Ary was not quite on the ball.

The most insulting yet amusing part was half way through our talk, his boss, another, “Director” was sitting at the bar about 10 yards from us talking on his cell phone. He must have just arrived because we spent most of  our time in the bar/restaurant on our lap tops with no WiFi and had never seen him. (we were in nature!) When Ary went over to his boss to suggest he talk to us (perhaps just listen) his boss said “No”. Instead he stayed at the bar and declined to come meet us.  Just sat there, talked on his cell phone and then walked away… Amazing. Becky’s a travel writer. Unbelievable.

The next morning when we were leaving these two men were having breakfast at the table next to us; we were the only people there. We went over to introduce ourselves and give some constructive feedback. I mentioned we had just come from Puri Lumbung Cottages and what a wonderful job the owner was doing there with the area and some of his plans. They know of the place because it’s highly respected in the area, so when he found out we had been talking with Nyoman at Puri Lumbung, he asked me if I would put them in touch with him. It was funny, I laughed. They are interested in asking him for ideas and if he would consult. Sadly for them, what we will remember most is the trash all over the beach and in the water. We got back on the rickety old boat taking us across the peninsula where we were met by a driver from the Matahari Beach Resort and Spa, the only 5 star resort in the northwest of Bali.