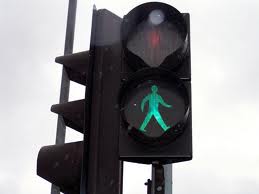 This small thing came flying by and my heart stopped. I’m not exactly sure what it was that went whizzing by my face, but it caused me to turn my head quickly and that was when I saw him. I saw him standing in front of a parked black Lexus. His Ray Ban aviator glasses hung from the button of his light blue shirt that was neatly tucked into white loose trousers fitting  his body perfectly. In that moment I realized he was staring at me. Had he been staring at me long? Had we met before?

I wasn’t sure and the more I tried to focus on his face, the more I realized I was staring at him. His dark, wavy hair, the small sharp nose and chiseled feature of his chin. We stood there for what felt like 10 minutes but couldn’t have been more than 30 seconds, just looking at each other in wonder. For a moment I felt frozen in time. As if I couldn’t move or speak and whatever I was thinking about before that moment was gone. All thoughts vanished. The only thing running through my mind was, “Is he going to walk away? Is he going to just leave me here?”

He didn’t walk away and he didn’t leave me there as I started to cross the street. At that moment the light turned green, people started moving quickly, cars stopped at the intersection and I began to move with them. Gracefully putting one foot in front of the other I walked towards the black Lexus. As I gently brushed away the tingling feeling from whatever whizzed by my cheek I saw him smile. He gave me a big, wide, warm smile and I noticed he hadn’t shaved. He had a rough five o’clock shadow and he was grinning from ear to ear. My stomach felt tense, my movements stiff and there was energy, a connection that seemed to be pulling me in his direction. I could feel myself in a current. The green man on the stoplight started blinking and I felt myself relax as I walked closer and noticed his outstretched hand waving and his bright, infectious smile. I stood in front I him and he was laughing nervously as he said, “You must be Jen. I’m Sam. I wasn’t expecting us to meet like this. I thought we’d meet tomorrow when I had some time to recover from travelling.”

And we laughed together. It was the first of many times in our lives we would laugh like that. It has been said an indication of transformation taking place within you is that you encounter more and more meaningful coincidences in your life. More and more synchronicities, which accelerate to the point where you actually experience the miraculous. It took many months of getting to know each other, only to realize, it was all in that initial feeling we had when we ran into each other on the street, the day before we had been set up to meet for the first time. That moment of knowing how sweet it felt the first time he said, “This is the first time I’ve met a woman who is more beautiful than her pictures. You’re more beautiful than your pictures you know; they don’t nearly capture your deep, rich laugh.” 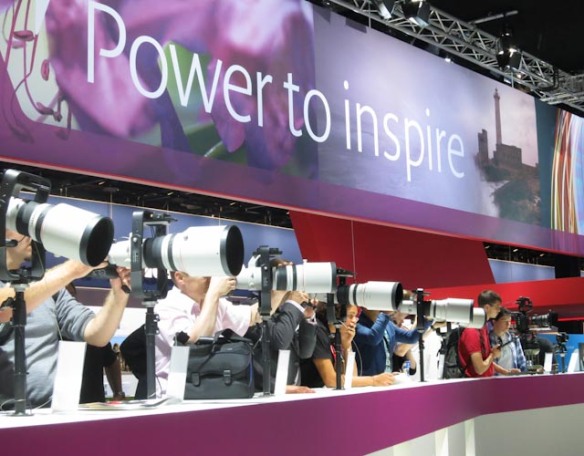 I’m building my courage around listening to my inner voice more and more and allowing it to guide me to the next place. This time, when I was in Berlin last week, (I went with the family from Italy to Berlin and we said goodbye there) it kept telling me to go to Cologne. Thinking back, I had never even seen Cologne on a map or thought about going there. As I started to look for a hotel most places I tried were booked. So I asked someone at my hotel in Berlin to call for me and help me book in German.  That was how I found out about Photokina.

Photokina is the biggest photography and digital imaging trade show in Europe. It happens in Cologne every two years and draws thousands of people. It was happening during the dates I was trying to go. 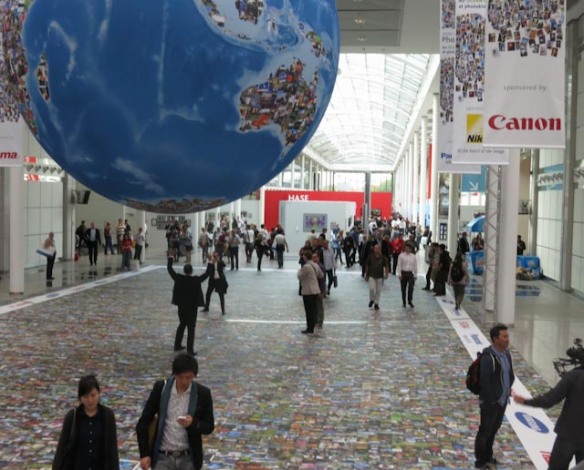 I managed to find a hotel that wasn’t triple the price and quickly booked a train ticket. When people in Berlin asked me  why I was going to Cologne I had to tell them I really didn’t know, I was just following that little voice. When I mentioned Photokina to a few photographers and graphic designers they all knew about it and had been. So I bought a ticket on-line for all 5 days and began to settle into that familiar feeling of, “I have absolutely no idea what I’m doing.”

Arriving in Cologne I started feeling really afraid of this decision. What I read on-line started making me feel tense and silly about going. I worried about everything at the show being German. I read the last one had over 1, 251 exhibitors from over 45 countries in the photography and imaging industries. I began to criticize myself for buying a ticket for all 5 days and paying however much I paid for the hotel. That’s when I decided to pull back on the self- judgment, shame and fear and I made a conscious decision to tell myself, “Ok, I’m here to connect and meet some interesting people. I love this stuff.”

After Mark & Ann left Berlin I went through a week of feeling really alone. In reality I wasn’t alone. I met new people every day and had fun. It was deeper; it was about feeling connected to people, about needing hugs and wanting to be with close friends who could really make me laugh. I was longing for some emotional support and cuddles.

I say this because when I arrived in Cologne the sheer size of the trade show felt overwhelming. I felt small and alone. I had to curb the doubting voices in my head that were telling me this was crazy, I’m not even a real photographer, who am I kidding and why on earth would I spend this money? (I’ve noticed that spending too much money is a theme with this loud, doubting voice I have. At these pivotal moments the fear of wasting my money always comes up) 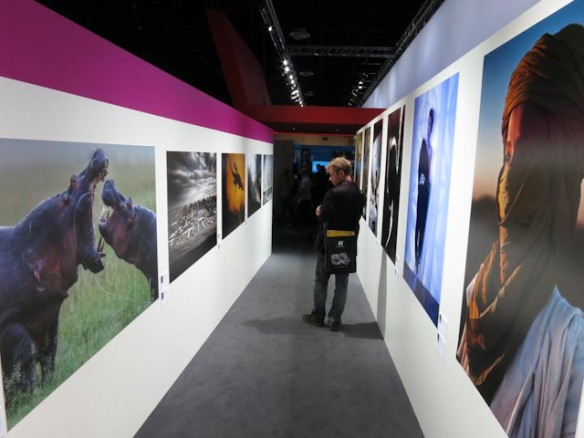 The first two days I walked around the trade show partly in awe of the size and partly dismissing the doubting voices in my head. It was like Macworld on steroids. There were over 180,000 visitors from 165 countries. The exhibition hall had about 11 different sections with rooms on 2 floors. New camera lines were being introduced, companies had huge rooms filled with camera and graphics equipment to test and play with. They had entertainment set up and areas to photograph. Presenters were giving talks on various stages every hour on everything from building a business to how the new Fuji X-Pro 1 has revolutionized their work. I walked through a gallery of portraits that evoked the feeling of looking into someone’s eyes and seeing their soul. I wandered aimlessly through a maze of camera and video gear, lightening gear and galleries of vibrant, eclectic images from all over the world. 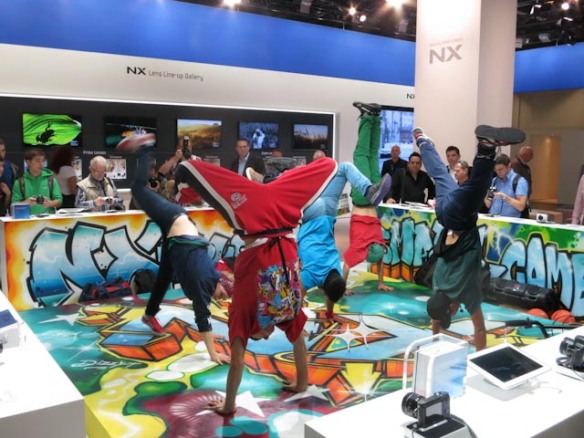 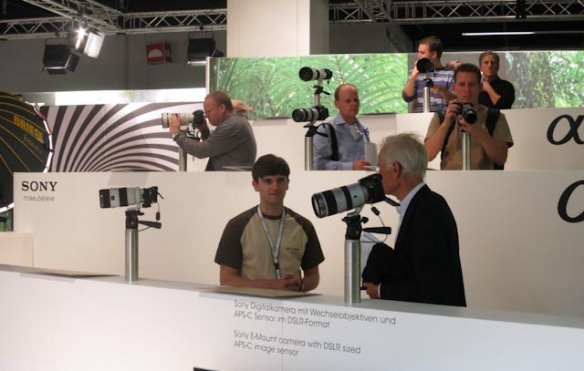 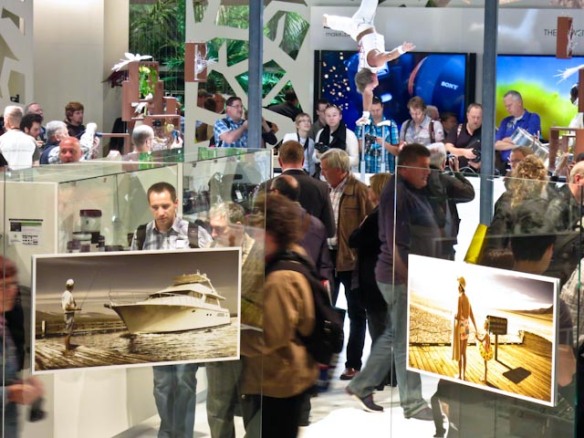 Most of the talks and workshops were in German but there were some presenters who spoke English and are “big names in photography” like Michael Grecco.  (Got milk? was one of his) His philosophy and work gave me real perspective and value.

He reminded me that feeling like a photographer is about being a visual storyteller. It’s about connecting with people and the camera and the equipment are just the tools to tell the story. That’s what I love most about photography. For his personal work he takes an assistant, one light, a camera and walks along Venice Beach looking for interesting, unusual people to take portraits of. He wanders the streets from Vegas to LA and captures people in their own environment.  Lords knows on Venice beach you can find plenty of funky people to photograph. You need to be so confident and competent with your technical ability that it’s like second nature, you don’t think about it anymore and the camera is not in the way of connecting with people. The photographs and images that stir us the most are the ones that evoke the essence of a person or situation. The photographer has connected us to something or someone who touches us deeply. I realized instead of asking myself, “how do I take this picture?” I need to ask myself, “what feeling am I trying to evoke with this picture. “

The other message was that you have to be willing to fail. Failure is a key ingredient in the creative process. I need to get better at this. Cultivating a healthy relationship with failure is essential because it’s part of how creativity and innovation is born. 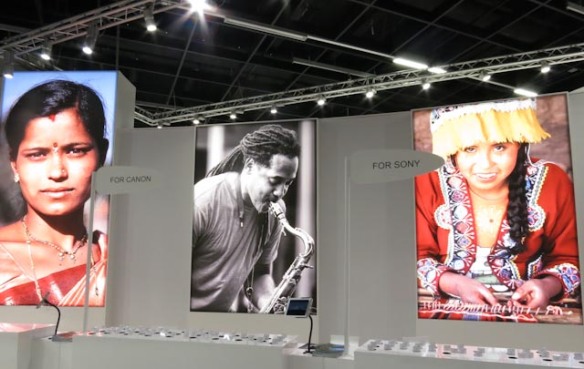 So after two days I started meeting some crazy Germans, as well Belgian, Dutch and Americans.  Vendors were having parties in the exhibition halls after the fair ended and lord knows, Germans love to drink beer. After a few beers it became pretty easy to connect and talk about photography. I met a really talented guy, Tim Kemple who works with The North Face, among other things. He is part of a new company called F-stop that had a booth at the show selling fantastic adventure style camera bags. They were serving sangria one night after the fair and he talked to me for a while. He offered to look at my blog and give me some feedback. 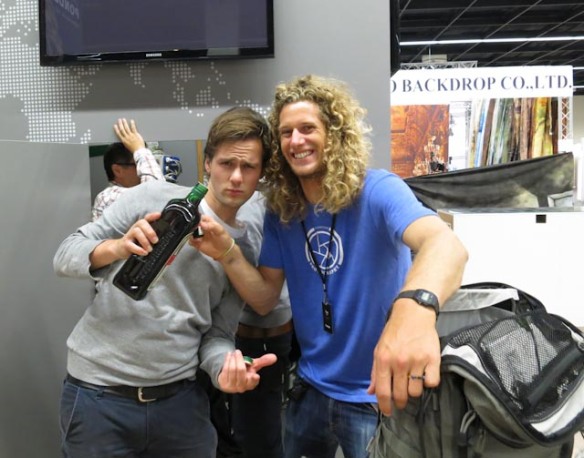 Guys from the F-Stop Team – The Sangria Night 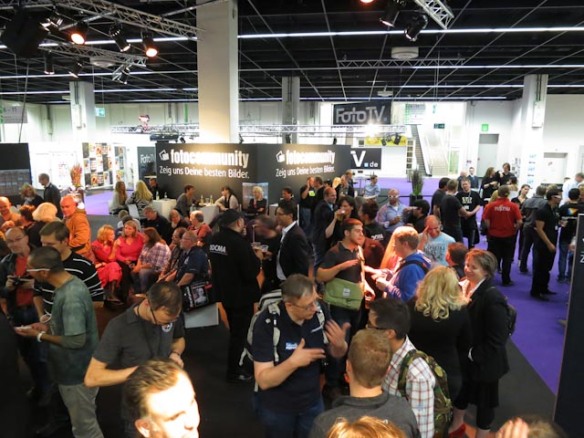 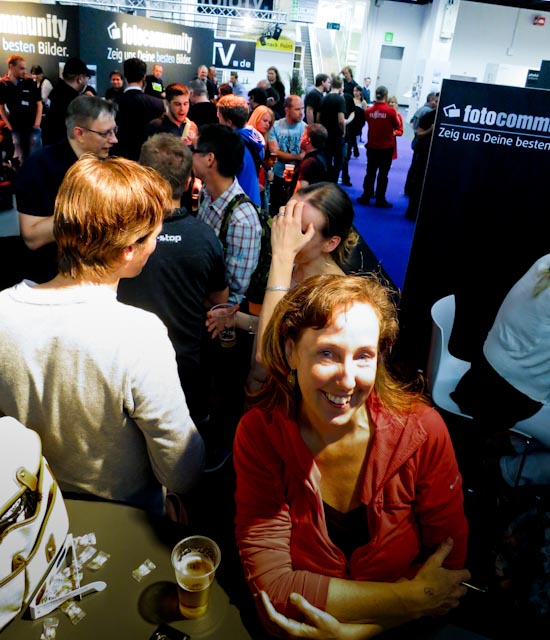 What shifted for me is that I started to say confidently, “Yes, I’m a photographer. I have a blog.” It’s funny what a few inspirational talks mixed with German beer and sangria will do for your confidence. After the second night of partying (the sangria night) I had the worst hangover I’ve had in years. I also had a lot of business cards in my wallet and I gave out all of mine. So I realized this morning, as I was nursing my cracking head ache and sending out emails with silly party photos to people, that we are really here to connect. When I hear and follow that inner voice I’m connecting with myself. That will always lead me to the experiences where I am wholeheartedly connecting with others. This time I felt myself grow when I started out feeling small and alone and ended up feeling courageous and connected. It was then I remembered that feeling connected is a key to life. 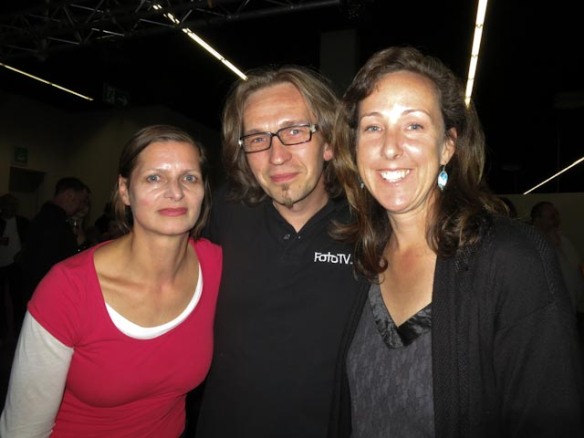 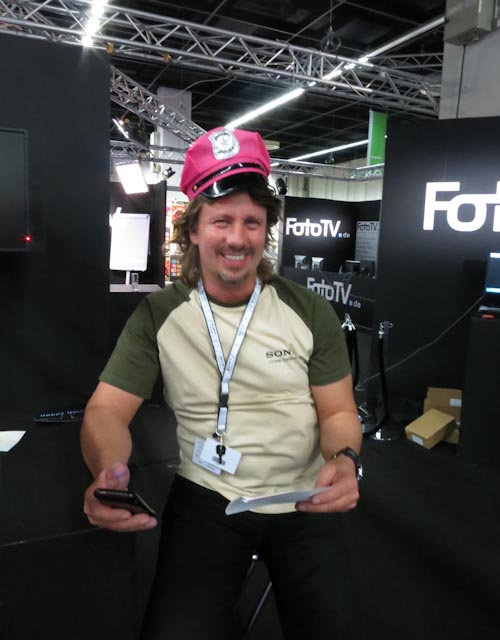 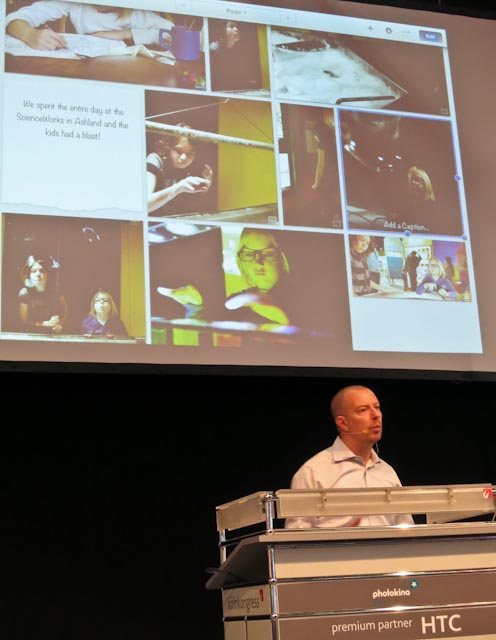 Learning iPhoto for the iPad 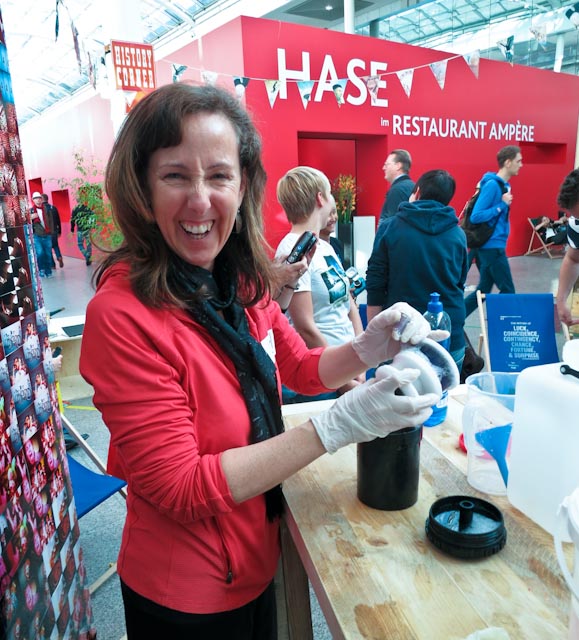 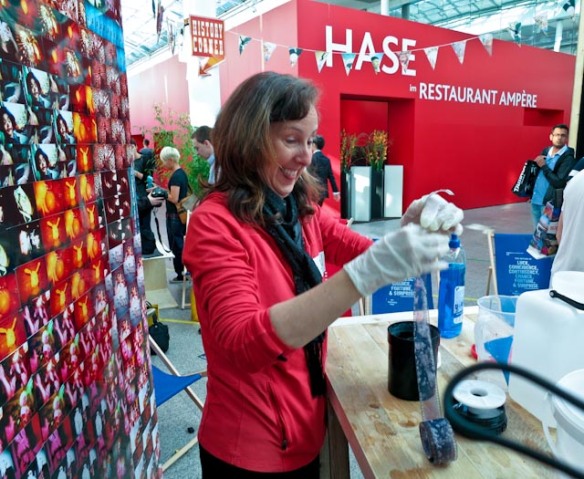 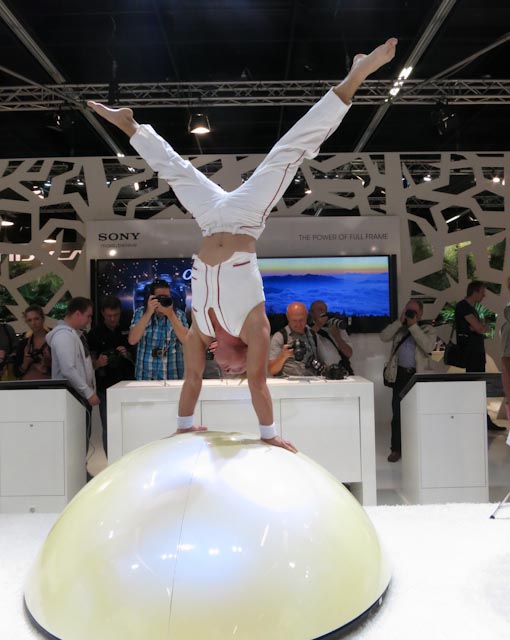 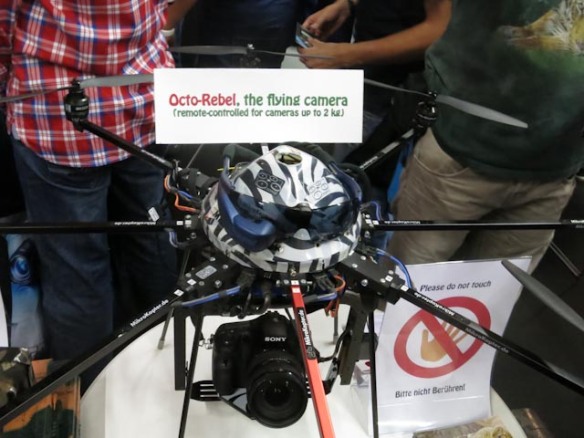 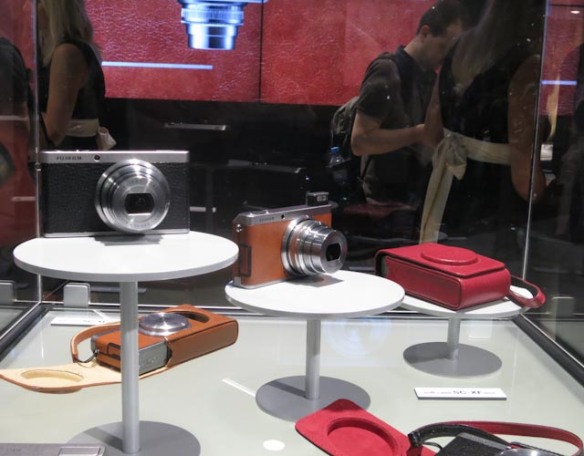 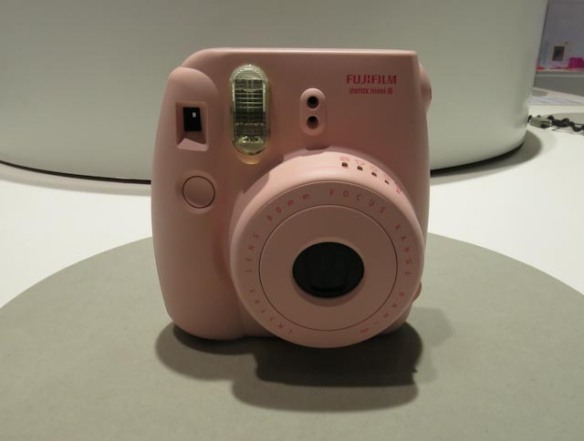 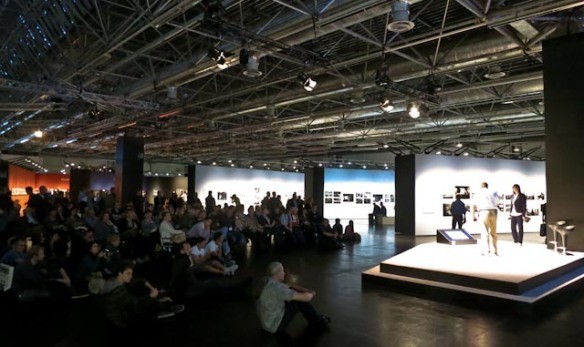 Photojournalist talking about his work on the Leica Stage 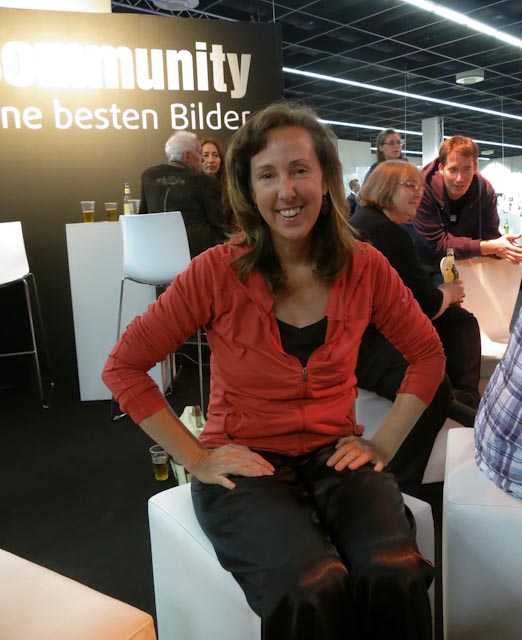 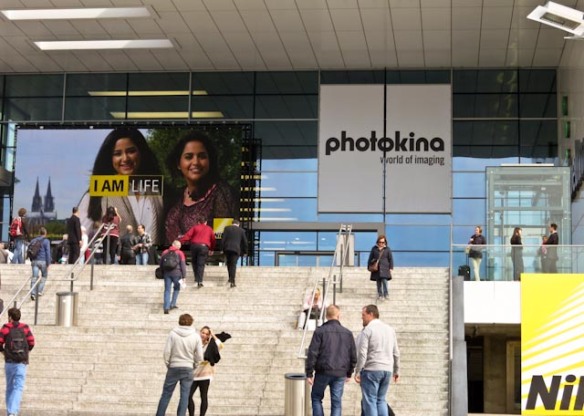